When Sir Charles Lyell coined the expression ‘Mind Over Matter’, mankind was coming to terms with the increasing evolutional speed of the brain over the body. Mind was elevated to ultimate driving force status, but it wasn’t until a century later, in a world dominated by the renewed proliferation of spiritual philosophies, that the phrase became a poster child for responsibility assumption. Deprived of its prefix, the ‘assumption’ that Una Szeemann and Bohdan Stehlik oppose to matter generates a rather problematic concept, surprisingly in tune with the uncertainties that characterize the current times, exploring the possibilities of parallel thinking, and above all capable of restoring chance as an equally valid, if more genuine answers provider.

The spiritualism addressed by Szeemann in her series of photographs Capillomancie (2012) transcends what happened in the 1960s to focus on an older spiritual time, interestingly not too distant from the one of Lyell’s illuminati, when Theosophical Society establisher Helena Petrowna Blavatsky’s baptismal ceremony was marked by a seemingly minor incident that eventually resulted in the whole chapel burning in flames – an episode that a few bystanders interpreted as a premonitory sign of the child psychokinetic powers. Far from blindly adhering to or openly dismissing this logic, Szeemann’s approach is wittingly agnostic. The fascination for the making of divinatory messages out of chance is here represented through one of the most mundane occurrences – the accumulation of hair on a shower pan and the consequent formation of accidental shapes that trigger a series of more or less intelligible patterns. Such exercise of tasseography, who could be construed as a domestic version of classic fortune-telling methods such as coffee-grounds or wine-sediments reading, further reflects a private dimension that introduces a note of melancholia as well as questioning to what degree coincidence plays a role in the definition of an image and of life in general.

Bohdan Stehlik’s sculptural series Explosions (2012) deploys similar strategies in terms of giving a tangible structure to a transitional moment. Cast in Carrara marble held together by a binding agent, they are situated on hybrid supports designed to highlight their intrinsic ambiguity. Partly pedestals, partly pieces of furniture, the plinths undermine their own position by constantly oscillating between monumentalization and trivialization.

This metaphorical tug of war, coupled with the explosions’ deliberate reduced size, challenge the Serra-esque notion of mammoth-sculpture, manifesting instead a minor scale but nonetheless significantly deep drama, conducible to a sense of inner turmoil, or, in the words of his author ‘a domesticated catastrophe’, something that can be shelved and contemplated despite its tragic nature.

When viewed together, Capillomancie and Explosions express a series of gripping dualities. Whereas Capillomancie is the crystallization of a future event, Explosions solidifies a past one. Both rely on minimalistic representational modes, monochromatic tones, and descriptive titles, but if Capillomancie comes across as cryptically explanatory (Capillo = hair, mancie = divination), Explosions is in contrast brutally direct, each matching the mood they aim to symbolize. Finally both are the result of a soul-searching process, and go on to stage a crisis set to investigate personal and historical issues. Their dialogue, largely constructed on expectations, unpredictability and discovery, mirrors the condition of their creators, who decided to embark on two parallel journeys following a period of close collaboration. If six years ago Una Szeemann and Bohdan Stehlik have made the decision to morph their individual efforts into a common practice, ‘Assumption over Matter’ reconciles these two aspects. Common ground is now determined by mutual recognition, with things coming full circle in a new chapter of their artistic path. 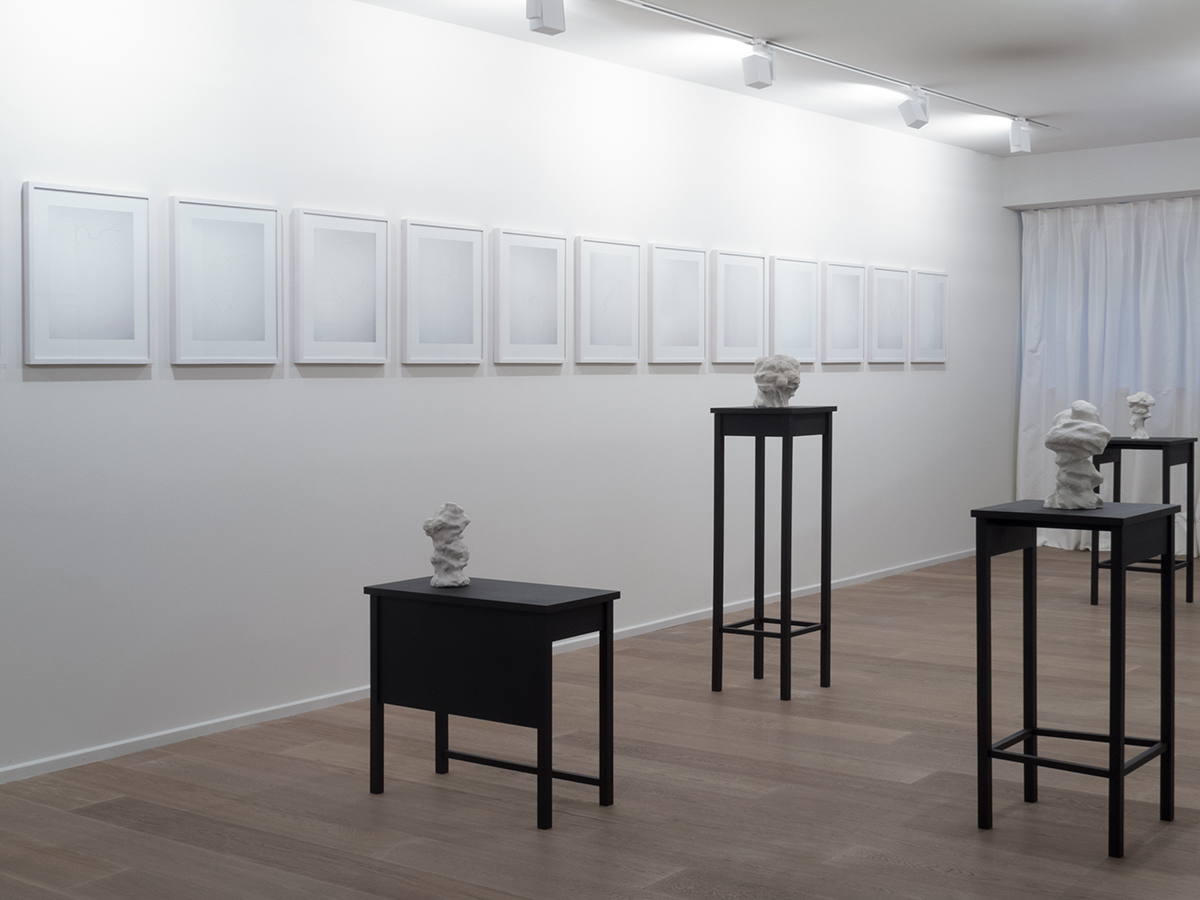 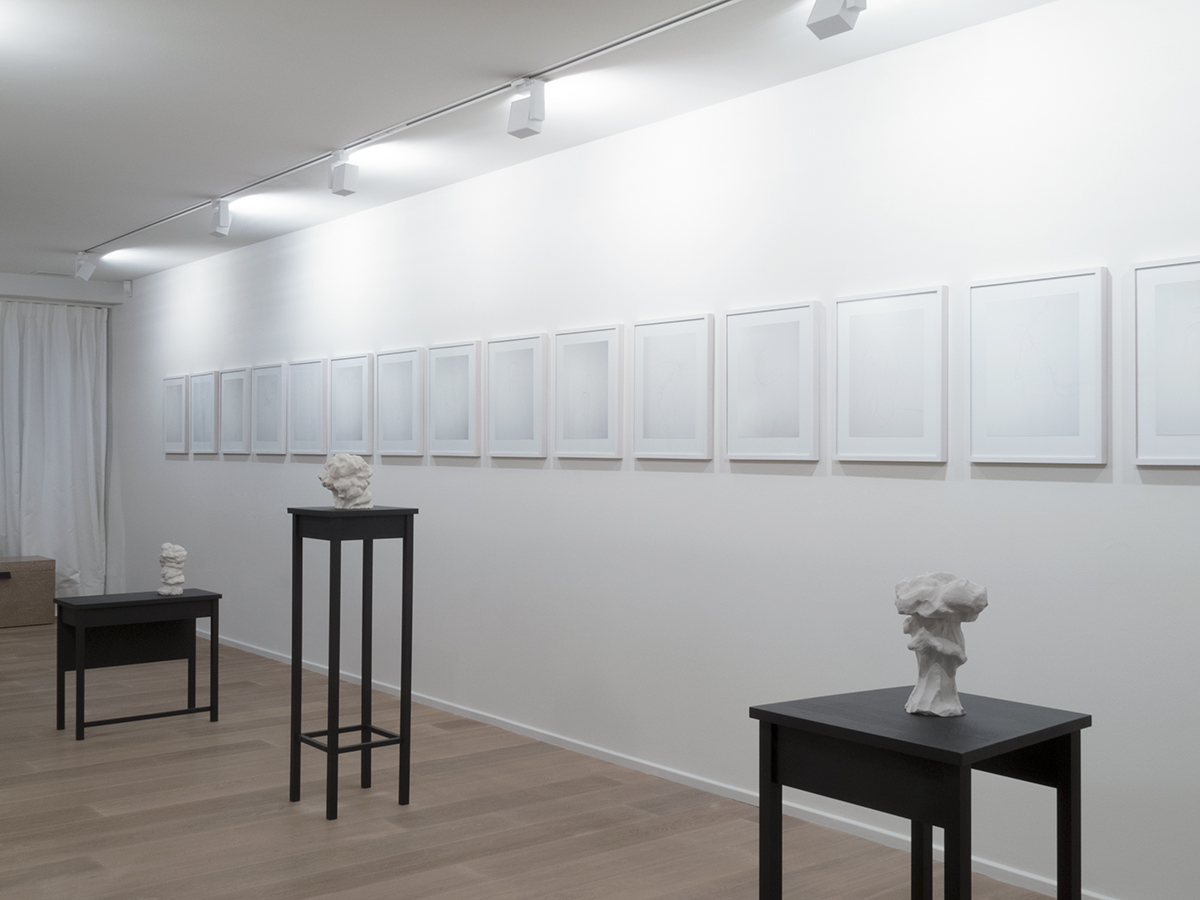 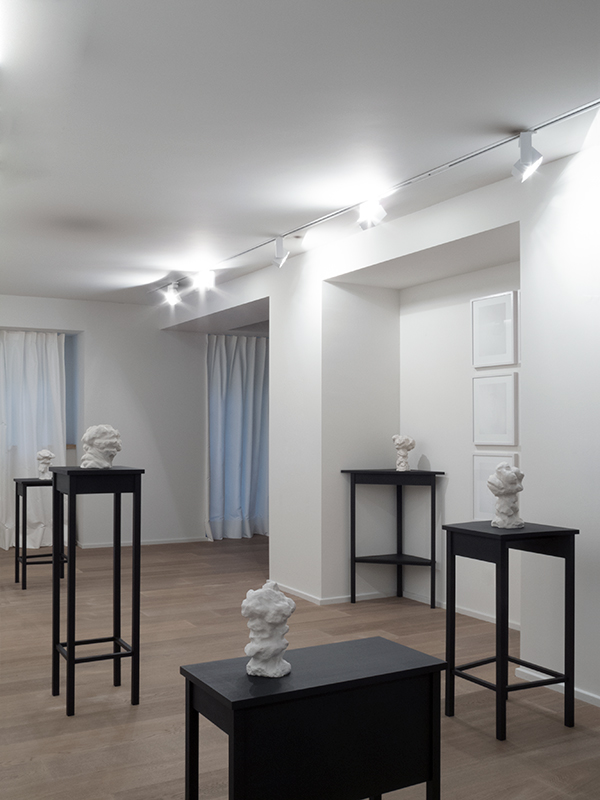